The struggles you’ll only understand if you fly with Ryanair 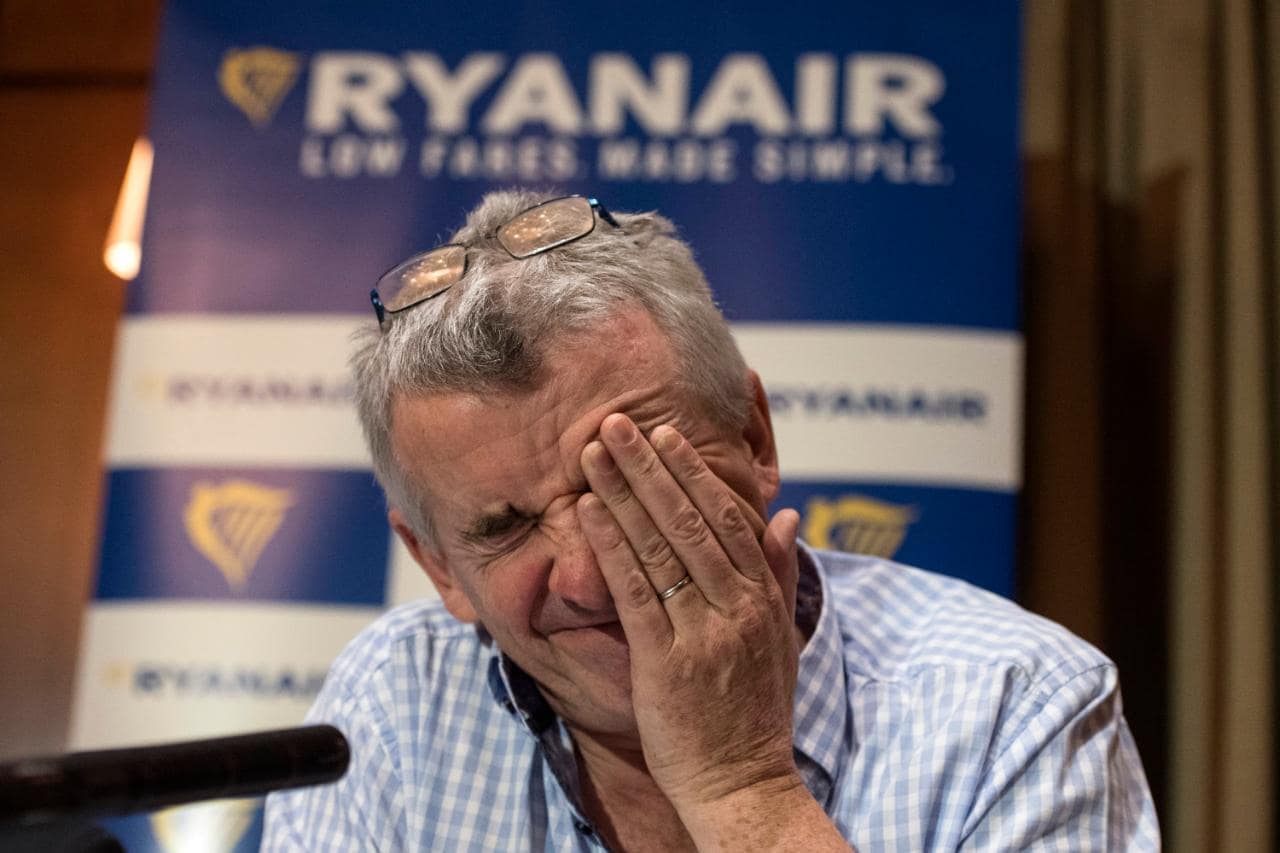 Love it or hate it, Ryanair is inescapable. Indeed, figures published this week show it is now Europe’s largest airline, having flown an incredible 152.4m passengers in 2019 – 6.8m more than the previous number one, Lufthansa.

If you’ve never flown with the low-cost behemoth, you’re part of a dwindling minority. For everyone else, the following should be familiar.

One of the most curious aspects of flying with Ryanair is the lack of seat-back pockets, meaning passengers must cling on to their novel, passport, iPad, or – dare we say it – copy of The Telegraph. After take-off, one can pop them on the tray table, or you could store your possessions in a small bag beside your feet – but it’s not exactly convenient. We take the seat-back pocket for granted – you only miss it when it’s not there.

It’s all down to speedy turnarounds, says Ryanair. Having pockets gives cabin crew something to check and clean, which takes up precious time. Another factor could well be weight. The heavier the plane, the more fuel it burns – and fuel is the single biggest cost for all airlines. Two square feet of soft material hardly tips the scales, but it all adds up. Ryanair, back in 2012, cut the size of its in-flight magazine, publishing it on A5 instead of A4 paper, a move it said would reduce its fuel bill by thousands of pounds.

The whiff of cheese and ham paninis

Even if you refrain from buying one of Ryanair’s in-flight cheese and ham paninis – and we strongly recommend you do, especially at €5.50 a pop – you won’t escape the smell, which, along with a sense of mild disappointment, tends to linger in the cabin.

In the age of Greta, Ryanair is at pains to tout its eco-credentials, describing itself at every opportunity as Europe’s “greenest” and “cleanest” airline. Admittedly, there is some truth to Ryanair’s utterances. It is Europe’s top major airline when it comes to CO2 emissions per passenger kilometre: 67g, compared to Virgin’s 78g and EasyJet’s 81g. But as Europe’s biggest airline, with 152.4m passengers in 2019, that tiny figure of 67g multiplies to a stonking great 10.2 megatonnes. There is no such thing as a “green” airline. Ryanair should stick to what it does best – providing cheap fares – and stop treated us like fools.

You know, the trumpet sound, which rings out at the end of most Ryanair flights, heralding another on-time arrival, despite the fact you took off half an hour late. Critics would say that’s schedule padding for you, though Ryanair claims it doesn’t engage in the practice of overstating journey times to meet punctuality targets. Yeah right.

Since November 2018, Ryanair passengers have only been permitted to travel with one small bag (35cm x 20cm x 20cm) free of charge. Do you have any inkling how tiny that is? Passengers have sought to get around the stingy rules by simply wearing all their clothes – or by stuffing garments into the pockets of an ingenious oversized jacket.

If you pay extra, of course (currently as much as £12 per person per flight) you can travel with a normal carry-on case. Or else you can wing it and hope nobody notices.

The bag policy is enforced at the gate. Before boarding starts, Ryanair staff patrol the area. If you’ve got a case you’re asked to show your boarding pass to prove you’ve paid the fee. If you haven’t, a tag goes on your bag, you’re charged £25, and your luggage is taken by baggage handlers on the tarmac and put in the hold. If the roaming representative doesn’t get you, those scanning passports at the gate probably will. Nevertheless, I’ve watched passengers attempt to slyly slipp away from approaching representatives. Others will politely argue, usually in vain, that their hefty holdall will fit under the seat in front.

Those with less chutzpah should embrace the backpack. Whenever I’ve flown with Ryanair it was with a rucksack. Not a particularly small one, either. I reckon it carries more than many of the wheelie cases and holdalls that don’t survive scrutiny, but when it is on my back it looks compact – and, without fail, has been allowed on board.

“Random” seat allocation – and The Fear

For years Ryanair’s “random” seat allocation policy almost always permitted people on the same booking to sit together, even if they refused to pay extra. But something strange started happening in the summer of 2017. Tens of thousands of passengers suddenly found themselves split up from their loved ones, often in seats many rows apart. Social media was inundated with tales of woe. Our favourite? The party of 23 that was scattered across 23 different rows – with each person occupying a middle seat.

Ryanair insisted it had not changed its policy, and says seats are still assigned “randomly” (despite an analysis by an Oxford University statistician making nonsense of this claim), but for passengers the deduction was simple: pay extra or you will be punished. Ryanair is now using fear to sell extras. It isn’t an empty threat. I’ve flown with Ryanair a handful of times in the last few years. I’ve never paid to choose a seat – and each time I’ve been split up from the rest of my group. “Remember, if you don’t reserve a seat you will be randomly allocated one at check-in,” the booking confirmation will warn. The Fear comes next – and only paying extra will banish it.

For those separated from their travelling companions by Ryanair’s seat allocation, a glimmer of hope remains – can you convince other passengers to swap? If you’re in row 3 and your partner is in row 23, it’s a no-go. But if just a few rows separate you then a complex series of consultations might begin. I proudly led one such arbitration a couple of years ago. No fewer than four parties were involved, each with the same goal – to avoid three hours surrounded by strangers. A tricky game of musical chairs ensued and all were satisfied. “You should be a professional negotiator,” quipped one witness.

How can the airline still call it “priority boarding” when the “priority” queue is three times longer than the regular one, as is now often the case? Watching people who had paid a tenner for so-called “priority boarding” join the back of a very long queue is sure to make you chuckle; call it was it really is – a queue for those the airline has convinced to pay extra.

Expect just a hint of unspoken camaraderie among the last to board. These are savvy folk who didn’t pay extra – and haven’t just spent 30 minutes standing in line. Well played.

Being sold to, constantly

You’re on the Ryanair website and you’ve selected your flights. Great, now it’s time to pay. Would you like priority boarding and a carry-on bag? What about seat selection? Security Fast Track? A check-in bag? Do you need insurance? Would you like airport parking? In-flight food and drinks? A hire car? Do you need a hotel? A hop-on and hop-off bus tour or tickets to a show? Endless sales. And once you’re on board… how about a scratchcard?

And ripped off because you’re British

Ryanair, uniquely, charges the same in pounds and euros for all extras, no matter what the official exchange rate is. This means, for example, that Britons must pay £25 for a check-in bag, while Europeans pay the equivalent of £21.41. How is that fair?

Being blinded by the yellow

The colour scheme on Ryanair’s planes (at least on the older ones) seems to have been inspired exclusively by the football kit of the Brazilian national side. And in plumping for blue and yellow, Ryanair has, according to various studies, opted for the most and least popular colours in the world. A metaphor, perhaps, for the divisive character of the airline.

Not actually flying to your destination

You live in Bristol and you fancy a weekend in Barcelona? Good news: Ryanair can get you there. Well, part of the way; the airline will actually drop you off in Girona, 100km from the Catalan capital. You can find your own way from there, right?

Not exclusive to Ryanair, stag and hen dos have become an unwelcome feature on some low-cost flights. You know the drill: groups of lairy lads and lasses – often in matching T-shirts, except for the bride or groom, who wears a gimp mask – chucking overpriced booze down their necks on the way to Barcelona, which is actually Girona (see above), making lots of noise and giving the cabin crew some lip, before finally being escorted off the plane at the other end by unamused police officers.

If ever you’re involved in an emergency landing, you will likely find yourself thanking Ryanair. Why? Because the airline displays safety instructions on the back of every seat, which frequent flyers will now surely know verbatim. Until that unlikely emergency landing you will continue to curse the airline for not offering something more interesting to look at.

Your pilot going on holiday

About that city break you’re going on: it can’t happen now, unfortunately, because – well, it’s all quite embarrassing really – but because there’s a backlog of annual leave at Ryanair; all the pilots are going away, you see, so the flight has been cancelled.

OK, enough with the Ryanair bashing. It really is the cheapest option out there. If you skip the fees and are willing to put up with the smelly sandwiches, services to dozens of European cities for as little as £9.99 one-way really do exist. No airline can match it for price.

Here is what Telegraph readers said:

“I used to fly Ryanair all the time. Couldn’t understand the criticisms of them. Now, however, they are a nightmare with their multitude of niggling little rules. So I only use them when there is no alternative.”

“For me, the biggest turn-off is the fact that they fly from and to airports which are many miles away from the city you actually want to be in. I live practically next door to Heathrow – but if I wanted to fly Ryanair from Stansted, I have to factor in the cost (and time) of the long journey.”

“You know what you get even if it means bad customer service and distinct lack of appreciation as a customer. Bag in hold, go on last and take a random seat. Easy trip.”

“Ryanair have consistently got me where I want to go without too much irritation. My biggest gripe is the gouging now at airports such as Stansted. Another is paying for so called priority boarding and the mixing up on a bus to the aircraft.”

“I can put up with yellow decor and scratchcards for those prices. Oh and being on the tall side, the lack of reclining seats is a godsend.”

What are your opinions on flying with Ryanair? We want to hear your experiences. Comment below to join the conversation.